Map of Free States and Slave States, 1861. During the Antebellum Era, the term “slave states” was synonymous with “the South,” and the term “free states” was synonymous with “the North.” In the latest (2010) US Census, all the states which had slaves before the war are listed as part of the South except Missouri and New Jersey. New Jersey, which established a plan for gradual emancipation during the war, had 18 elderly slaves when the Civil War began.
Image Source: Wikipedia Commons.

In 1860, right before the start of the Civil War, more free African Americans lived in “the South” than in “the North.” Does that mean anything? Does that mean, for example, that life for an un-enslaved African American was better in the South than in the North? Some people look at the raw numbers and make that leap. In this post, I will take a detailed look at population numbers for free blacks before the war, to determine if they, by themselves, show that blacks were better off in any region.

(1) This is the free black population for various groups of states:

* Numbers off due to rounding and small number of freemen in territories.

(2) While it’s true that the majority of free blacks lived in “the South,” the data is skewed by the large free black population in the Delaware, Maryland, and Washington, DC area. Almost one of four free blacks lived in this geographically small, contiguous area, while just 2.3% of US slaves resided in the area. That area is not representative of the South at all.

I find it much more useful to break-out the free black population by three separate regions, not two, viz.:

The term “Border state” was commonly used to describe Delaware, Kentucky, Maryland, and Missouri during the Civil War. The District of Columbia, which was created out of small portions of Maryland and Virginia, contained 11,131 free blacks and 3,185 enslaved blacks in 1860. The Virginia portions of the District were reverted back to that state in 1846.

(3) The real divide in the free black population is more about “East vs West” than “North vs South.” The majority of free people of African descent lived in the original 13 states and Washington, DC. Or put in another way, most free blacks lived on the East Coast.

(4) Free African Americans living west of the 13 Original States (and especially west and south of Ohio and Indiana)  were relatively scarce, especially in the Old SouthWest. To illustrate this point, consider that:
• OH and IN (two states in the Old Northwest; we now call it the Midwest) combined had 48,101 free blacks in 1860.
• The Old Southwest ~ AL, AR, FL, KY, LA, MO, MS, TN, and TX ~ combined had only 45,077 free blacks. Louisiana had 18,647 free blacks, many of whom had family origins in the land obtained from the Louisiana Purchase. Outside of Louisiana, then, these states were a no-man’s land for free blacks, even as the Deep South states contained the majority of enslaved blacks.

(6) Less than 2% of the population in the North was of African descent. And many of those African Americans were clustered in urban places in the northeast and Ohio. Demographically, the free states as a whole looked, from a statistical point of view, like modern day Idaho or Wyoming, which are also less than 2% African American. I would imagine that millions of whites living in the North went through entire lives and saw a real live African American just once or twice, if ever.

~ The following factoids refer demographics for the Union and the Confederacy, the two American Civil War antagonists ~

(9) The majority of free blacks (72.5%) in the combined population of the Union and the Confederacy lived in the Union states. The remainder (27.2%) resided in the Confederate states.

(10) Eight out of ten free black residents of the Confederacy lived in just three states: VA, NC and LA. The majority of the CSA’s free black population resided in a very small part of that putative nation.

So: What do these numbers mean? Do they make the case that the North or the South was “better” for free blacks? I insist that we can’t answer the question by looking at demographics alone. But the data, plus some things we know, show/suggest that:

• “Western America” — that is, America to the west of the original 13 colonies — was “unattractive” to free blacks, or perhaps, posed obstacles of some kind to free black migration there.

• A large number of free blacks lived in the southern MidAtlantic (the area from Delaware to North Carolina). We know that many free blacks resided there going back to the colonial era, and that a number of them gained freedom during and after the Revolutionary War. Those states had a history of free African American families going back many years… free black families were entrenched here.

And also, the relatively large size of the free African American communities in the southern MidAtlantic may have acted as a kind of gravity for the free blacks who lived there. The size of these populations facilitated the creation of communities that could build and sustain their own institutions, and offer themselves protection, opportunities for improvement, even business and financial opportunities.

And importantly, the decline of MidAtlantic tobacco agriculture created an excess of slave labor which provided opportunities for slaves to be freed through manumission. So it is not surprising that so many free blacks lived in that area.

Sorry folks, there is no Grand Finale. I don’t think that these statistics, alone, give us reason to say that free black life was “better” in the free states than the slave states, or vice versa. But if you put a gun to my head and forced me to jump to some conclusions about free African American life right before the Civil War, I would say:

– the “Western US” (west of the Original 13 states) was apparently less attractive or even somehow “inhospitable” to free blacks;

– the NorthEast and MidAtlantic South were apparently more attractive to free blacks;

– Many blacks on the East Coast, in the southern MidAtlantic states especially, lived in areas that had free black populations dating back to the Colonial, Revolutionary War, and Early Republic eras. It appears that free blacks tended to live in places that free blacks had always lived… they stayed near their ancestral homes.

– Meanwhile, the free white and enslaved black populations grew explosively, to the Mississippi River and beyond. Thus, the expansion of America and slavery seems to coincide with decreased opportunities for enslaved African Americans to gain their freedom. 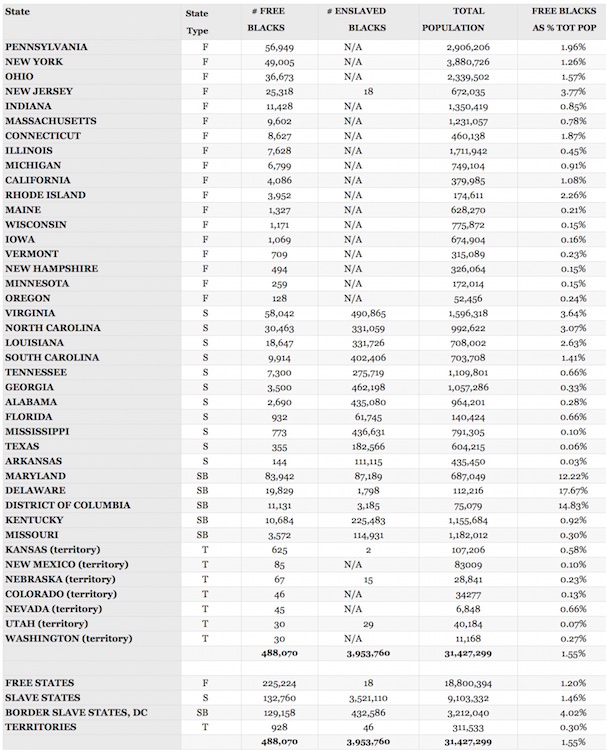 Legend: F = Free State, S = Slave State, SB = Border (Slave) State, T = Territory.
Sources: Historical Census Browser, from the University of Virginia, Geospatial and Statistical Data Center: http://mapserver.lib.virginia.edu/ – Retrieved 2014 (note that, the numbers at the site have changed in very small amounts since then); The Negro’s Civil War: How American Blacks Felt and Acted During the War for the Union (Appendix A), by James M. McPherson

One thought on “The Demographics and Geography of Free Blacks before the Civil War: North & South, East & West”