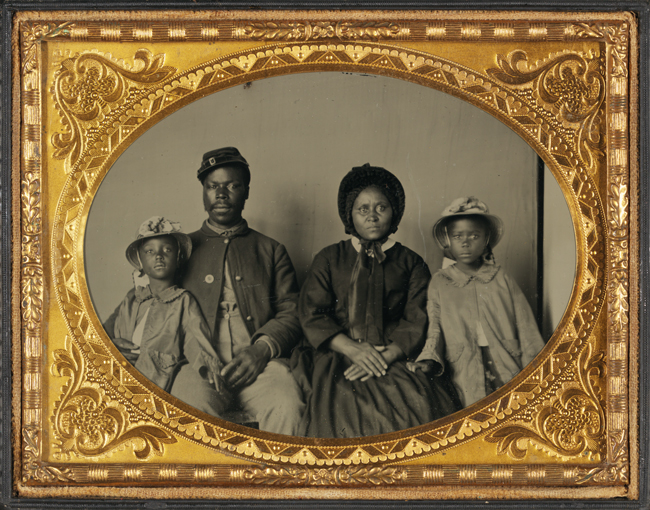 In February of 1864, Spottswood (AKA Spotswood or Spottwood) Rice, a slave in Missouri, made a momentous decision: he fled bondage and enlisted in the Union army. Rice’s story is discussed in the previous blog post. Army enlistment gave Rice his freedom, but it did not free his children. But he was determined that he would have them.

One of Rice’s children, whose adult/married name was Mary A. Bell, was “owned by an old maid named Miss Kitty Diggs.” Back then, members of slave families might have different owners, and that could complicate the process of reuniting them.

By September 1864, Spottswood Rice had apparently made attempts to get his children, but was frustrated by his lack of success. He wrote two letters, one to his daughter Mary, the other to owner Katty (Kitty) Diggs, to let them know his plans. The letters, dated September 3, 1864, were written from Benton Barracks Hospital, St. Louis, Missouri, where Rice was recovering from chronic rheumatism.

Three things are striking in these letters. The first is Rice’s contempt for, and indignation at, the idea that he could “steal” his own children from their slaveowners. He tells Kitty Diggs “you call my children your pro[per]ty not so with me my Children is my own and I expect to get them.” Anyone who tries to prevent him from getting his children, he tells Diggs, is his “enemy.”

The second things that is striking is the sense of power and empowerment Rice has gotten from being a soldier. When Rice comes to get his daughter – and he says forcefully that he is coming – he warns that he “will have bout a powrer and autherity to bring hear away and to exacute vengencens on them that holds my Child… this whole Government gives chear to me.”

And finally, one cannot help but be struck by the religious language employed by Rice. He tells Diggs that his daughter Mary “is a God given rite of my own” and that “the longor you keep my Child from me the longor you will have to burn in hell.” He tells his daughter that Diggs “is the frist Christian that I ever hard say that aman could Steal his own child especially out of human bondage.” Although in fact the idea that slaveholder property rights trumped the slaves’ family rights was a common belief of most white southern Christians at the time. Unsurprisingly, Rice became a reverend in the African Methodist Episcopalian (A. M. E.) Church after the war.

Rice speaks with a righteous voice that proclaims, with God and government behind me, I shall prevail. His daughter would fondly recall many years later that she loved army men, and any man who would “fight for his rights.” And, she might have added, she loved men who fought for their children, just as her father fought for her.

My Children I take my pen in hand to rite you A few lines to let you know that I have not forgot you and that I want to see you as bad as ever now my Dear Children I want you to be contented with whatever may be your lots be assured that I will have you if it cost me my life on the 28th of the mounth. 8 hundred White and 8 hundred blacke solders expects to start up the rivore to Glasgow and above there thats to be jeneraled by a jeneral that will give me both of you when they Come I expect to be with, them and expect to get you both in return. Dont be uneasy my children I expect to have you. If Diggs dont give you up this Government will and I feel confident that I will get you

Your Miss Kaitty said that I tried to steal you But I’ll let her know that god never intended for man to steal his own flesh and blood. If I had no cofidence in God I could have confidence in her But as it is If I ever had any Confidence in her I have none now and never expect to have And I want her to remember if she meets me with ten thousand soldiers she [will?] meet her enemy I once [thought] that I had some respect for them but now my respects is worn out and have no sympathy for Slaveholders. And as for her cristianantty I expect the Devil has Such in hell You tell her from me that She is the frist Christian that I ever hard say that aman could Steal his own child especially out of human bondage

You can tell her that She can hold to you as long as she can I never would expect to ask her again to let you come to me because I know that the devil has got her hot set againsts that that is write now my Dear children I am a going to close my letter to you Give my love to all enquiring friends tell them all that we are well and want to see them very much and Corra and Mary receive the greater part of it you sefves and dont think hard of us not sending you any thing I you father have a plenty for you when I see you Spott & Noah sends their love to both of you Oh! My Dear children how I do want to see you

I received a leteter from Cariline telling me that you say I tried to steal to plunder my child away from you now I want you to understand that mary is my Child and she is a God given rite of my own and you may hold on to hear as long as you can but I want you to remembor this one thing that the longor you keep my Child from me the longor you will have to burn in hell and the qwicer youll get their for we are now makeing up a bout one thoughsand blacke troops to Come up tharough and wont to come through Glasgow and when we come wo be to Copperhood rabbels and to the Slaveholding rebbels for we dont expect to leave them there root neor branch but we thinke how ever that we that have Children in the hands of you devels we will trie your [vertues?] the day that we enter Glasgow

[1] Slavery was abolished in Missouri in February, 1865. The13th Amendment, which abolished slavery nationwide, was ratified in December 1865.

[2] The two letters from Rice were forwarded to Union General William Rosecrans, Commander of the US Army’s Department of the Missouri, by F. W. Diggs. Diggs was the brother of Kitty Diggs, and owned one of Spottswood Rice’s children. Diggs wrote to the general, “I write this to ask the favour of you to send the scoundrel that wrote (the letters) down to the army  I do not think that he should be allowed to remain in the state… to be thus insulted by such a black scoundrel is more than I can stand.” All of the correspondence is in Freedom: A Documentary History of Emancipation, 1861–1867; Series 2, The Black Military Experience, ed. Ira Berlin, Joseph P. Reidy, and Leslie S. Rowland; pages 689-691.