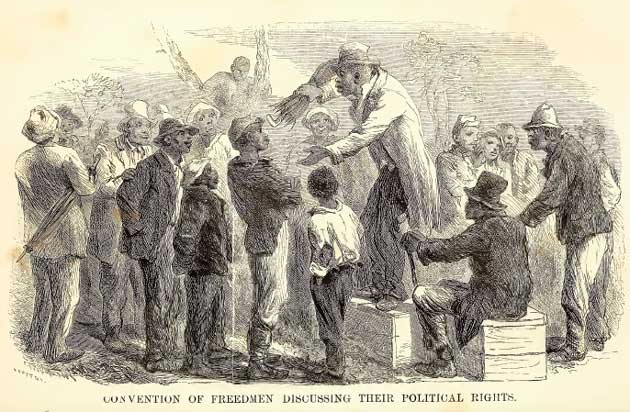 A group of freedmen in Atlanta, Georgia, circa 1865, holding a “street convention” to discuss their political status in the wake of the Civil War and emancipation.
Image Source: The South: A tour of its battlefields and ruined cities, a journey through the desolated states, and talks with the people, by John Trowbridge.
******

In the summer of 1865, and in the following winter, I made two visits to the South, spending four months in eight of the principal States which had lately been in rebellion. I saw the most noted battle-fields of the war. I made acquaintance with officers and soldiers of both sides. I followed in the track of the destroying armies. I travelled by railroad, by steamboat, by stage-coach, and by private conveyance; meeting and conversing with all sorts of people, from high State officials to “low-down” whites and negroes; endeavoring, at all times and in all places, to receive correct impressions of the country, of its inhabitants, of the great contest of arms just closed, and of the still greater contest of principles not yet terminated.

Trowbridge wrote The South under commission of L. Stebbins, a Hartford, Connecticut, publisher. Trowbridge’s “tour” of the post-war South was one of several such first hand accounts of the region that were produced by the press. His book won praise for its impartial, fair-minded approach to the subject, and the detail and breadth of his study.

I purchased a copy of The South during a recent visit to Gettysburg, Pennsylvania, and found it an interesting and compelling read. The original version is in the public domain; it can be viewed by going here: http://www.archive.org/details/southtourofitsba7228trow

Below, I have provided an interesting excerpt from the book about post-war Atlanta. Large swaths of that city were devastated during Sherman’s march to the sea in late 1864, and the ruin was still evident when Trowbridge visited the area the following year. This excerpt touches on several subjects, including:
• the harshness of post-war life in the South, especially for freed blacks
• Union support among poor southern whites
• relations between blacks and poor whites in the South
• views on who was responsible for some of the ruin in Atlanta (this differs from the view that Sherman’s Union forces were to blame for all of the burning in the city)
• African American dialogue concerning their political future in the post-war South.
****

From John Trowbridge’s The South:

IN AND ABOUT ATLANTA (Chapter LXIII)

A sun-bright morning did not transmute the town into a place of very great attractiveness. Everywhere were ruins and rubbish, mud and mortar and misery. The burnt streets were rapidly rebuilding; but in the mean while hundreds of the inhabitants, white and black, rendered homeless by the destruction of the city, were living in wretched hovels, which made the suburbs look like a fantastic encampment of gypsies or Indians.

Some of the negro huts were covered entirely with ragged fragments of tin-roofing from the burnt government and railroad buildings. Others were constructed partly of these irregular blackened patches, and partly of old boards, with roofs of huge, warped, slouching shreds of tin, kept from blowing away by stones placed on the top. Notwithstanding the ingenuity displayed in piecing these rags together, they formed but a miserable shelter at the best. “In dry weather, it’s good as anybody’s houses. But they leaks right bad when it rains; then we have to pile our things up to keep ’em dry.” So said a colored mother of six children, whose husband was killed “fighting for de Yankees,” and who supported her family of little ones by washing. “Sometimes I gits along tolerable; sometimes right slim; but dat’s de way wid everybody; — times is powerful hard right now.”

The destitution among both white and black refugees was very great. Many of the whites had lost everything by the war; and the negroes that were run off by their masters in advance of Sherman’s army, had returned to a desolate place, with nothing but the rags on their backs. As at nearly every other town of any note in the South which I visited, the smallpox was raging at Atlanta, chiefly among the blacks, and the suffering poor whites.

I stopped to talk with an old man building a fence before the lot containing the ruins of his burnt house. He said :”The Yankees didn’t generally burn private dwellings. It’s my opinion these were set by our own citizens, that remained after Sherman’s order that all women who had relatives in the Southern army should go South, and all males must leave the city except them that would work for government.

“I put for Chattanooga. My house was plundered, and I reckon, burnt, by my own neighbors, — for I’ve found some of my furniture in their houses. Some that stayed acted more honorably ; they put out fires that had been set, and saved both houses and property. My family is now living in that shebang there. It was formerly my stable. The weather-boards had been ripped off, but I fixed it up the best I could to put my little ‘uns in till we can do better.”

Another old man told me the story of his family’s sufferings, with tears running down his cheeks. “During the battle of July, I had typhoid fever in my house. One of my daughters died, and my other three were down with it. The cemeteries were being shelled, and I had to take out my dead child and bury her hastily in my backyard. My house was in range of the shells ; and there my daughters lay, too sick to be moved.” His description of those terrible days I shall not repeat. At length his neighbors came with ambulances, and the sick daughters were removed. They were scarcely out of the house when a shell passed through it.

Walking out to visit the fortifications, I stopped to look at a negro’s horse, which had been crippled by a nail in his foot. While I was talking with the owner, a white man and two negroes, who had been sitting by a fire in an open rail-cabin close by, conversing on terms of perfect equality, came out to take part in the consultation, around the sick beast. One proffered one remedy; another, another.

“If ye had some tare,” said the white man (meaning tar), “open his huf, and bile tare and pour int’ it.”

His lank frame and slouching dress, — his sallow visage, with its sickly, indolent expression, — his lazy, spiritless movements, and the social intimacy that appeared to exist between him and the negroes, indicated that he belonged to the class known as “Sand Hillers ” in South Carolina, “Clay-eaters” in North Carolina, “Crackers” in Georgia, and “white trash” and “poor whites” everywhere. Among all the individuals of this unfortunate and most uninteresting class, whom I have seen, I do not remember a specimen better worth describing. I give his story in his own words.

He told me his name was Jesse Wade. “I lived down in Cobb,” (that is, Cobb County,) — seating himself on the neap of the negro’s wagon, and mechanically scraping the mud from it with his thumb-nail. “I was a Union man, I was that, like my daddy befo’e me. Thar was no use me bein’ a fule ‘case my neighbors was. The Rebel army treated us a heap wus ‘n Sherman did. I refugeed, — left everything keer o’ my wife. I had four bales o’ cotton, and the Rebs burnt the last bale. I had hogs, and a mule, and a boss, and they tuk all. They didn’t leave my wife narry bedquilt. When they ‘d tuk what they wanted, they put her out the house and sot fire to ‘t.

“Narry one o’ my boys fit agin the Union; they was conscripted with me, and one night we went out on guard together, we did, and jest put for the Yankees. All the men that had a little property went in for the wa’, but the po’ people was agin it. Sherman was up yer to Kennesaw Mountain then, and I left, I did, to jine him.”

Wade claimed to have acted as “a scout, and referred me to the quartermaster : ”This one that ‘s yer,” (the quartermaster at Atlanta,) “you ax him what Wade done, if you don’t reckon I tell the truth.” He pronounced the division of the Federal forces a great stroke of strategy. “After we split the army, the Rebels couldn’t hold us no hack.”

He was very poor. “I’ve got two hosses and a wagon,and I shouldn’t have them if Sherman hadn’t gin ’em tu me.” He held up his feet, and looked at his toes protruding through great gaps in his shoes. “I cain’t git money enough to buy me a new pair, to save my life.”

“I beat ye, then,” said the owner of the crippled horse, showing a very good pair of boots.

I asked Wade how old he was. “I’m in my fifty-one year old,” he replied ; “and thar’s eight on us in the family, and tu hosses.”

I inquired concerning education in his county. “Thar’s a heap o’ po’ men in Cobb that kain’t read nor write. I ‘m one. I never went to skule narry time, and I was alluz so tight run I never could send my chil’n, only ‘tween crap time.”

”What do you mean by ‘tween crap time.'”

“When I’d laid by my crap,” (that is, stopped hoeing it, as corn) “till fodder pullin’. I alluz had to make a little cotton, to keep up. I could alluz rent land befo’e the wa’, by givin’ half to the owners, — them a pound o’ cotton, and me a pound o’ cotton; them a load and me a load. That’s tu much; but I kain’t git it for that now. You might as well try to git their eyes as their land.”

Wade’s theory of reconstruction was simple, and expressed in few words :”We should tuk the land, as we did the niggers, and split it, and gin part to the niggers and part to me and t’ other Union fellers. They ‘d have had to submit to it, as they did to the niggers.” I also found the freedmen, who had gathered about us, unanimously of this opinion.

“The nigger,” said Wade, surprised at so simple a question.

“Do you mean to say that one of these black men will do more work than you?”

He went on to complain that he couldn’t always get pay for the work he did. “A man owes me money for wood. If he don’t pay me soon, I’ll take a stick and beat it out on him.”

“That’ll be to work for it twict, and not git it then,” observed a negro, very wisely; and I trust Wade was persuaded not to try the stick.

“Ought to have such laws yer as dey has up in Tennessee,” said another negro. “Dar you ‘d git yer money! Laws is strick in Tennessee! Ebery man chalks a line up dar. A man owes you money, de probo’ marshal make him toe de line. I’s been round, since de wa’ busted, and I han’t seen no whar laws like dey got up dar in Tennessee.”

By this time a large number of negroes had assembled on the spot, dressed in their Sunday clothes; and such an animated discussion of their political rights ensued, that, concluding I had strayed by mistake into an out-door convention of the freed people, I quietly withdrew, — followed by my friend Wade, who wished to know if I could accommodate him to a “chaw of tobacker.”