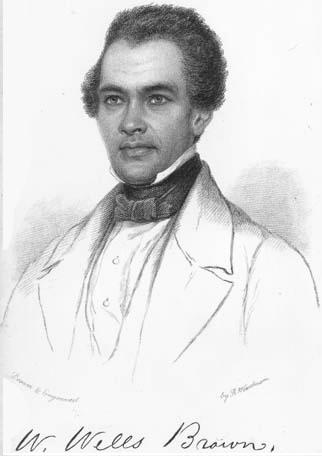 Image of author/historian/social activist William Wells Brown from his book, Three Years in Europe: Places I Have Seen and People I Have Met.
SOURCE: Wikipedia

William Wells Brown, as noted in Wikipedia, “was a prominent African-American abolitionist lecturer, novelist, playwright, and historian in the United States. Born into slavery in Kentucky, he escaped to Ohio in 1834 at the age of 20. He settled in Boston, Massachusetts, where he worked for abolitionist causes and became a prolific writer. While working for abolition, Brown also supported causes including: temperance, women’s suffrage, pacifism, prison reform, and an anti-tobacco movement. His novel Clotel (1853), considered the first novel written by an African American, was published in London, England, where he resided at the time; it was later published in the United States.”

Brown wrote many books, including the autobiographical Narrative of William W. Brown, a Fugitive Slave. Written By Himself. The website DocSouth summarizes the book here, saying in part:

Embarking on a career as a lecturing agent for the Western New York Anti-Slavery Society in 1843, Brown eventually moved to Boston in 1847, where he began his impressive literary career. In that same year, he wrote and published his autobiography, the Narrative of William W. Brown, a Fugitive Slave. Written by Himself. With its four American and five British editions appearing before 1850, Brown’s Narrative, second in popularity only to Frederick Douglass’s 1845 Narrative of the Life of Frederick Douglass, an American Slave, brought him international celebrity.

As William Wells Brown’s first published work and his most widely read autobiography, the 1847 Narrative occupies an important place within not only his oeuvre but also the broader African American literary tradition.

In Narrative, Wells says that after he escaped from bondage in Kentucky, he took the route to freedom through Ohio. Among his many concerns as a freeman, interestingly enough, was his name. As a boy, he had been ordered to change his name, from William to Sandford; he found this “one of the most cruel acts that could be committed upon my rights.”

But as a free man, he could reclaim his name, which he did; this is from Narrative:

My escape to a land of freedom now appeared certain, and the prospects of the future occupied a great part of my thoughts. What should be my occupation, was a subject of much anxiety to me; and the next thing what should be my name? I have before stated that my old master, Dr. Young, had no children of his own, but had with him a nephew, the son of his brother, Benjamin Young. When this boy was brought to Doctor Young, his name being William, the same as mine, my mother was ordered to change mine to something else.

This, at the time, I thought to be one of the most cruel acts that could be committed upon my rights; and I received several very severe whippings for telling people that my name was William, after orders were given to change it. Though young, I was old enough to place a high appreciation upon my name. It was decided, however, to call me “Sandford,” and this name I was known by, not only upon my master’s plantation, but up to the time that I made my escape. I was sold under the name of Sandford.

But as soon as the subject came to my mind, I resolved on adopting my old name of William, and let Sandford go by the board, for I always hated it. Not because there was anything peculiar in the name; but because it had been forced upon me. It is sometimes common at the south, for slaves to take the name of their masters. Some have a legitimate right to do so. But I always detested the idea of being called by the name of either of my masters. And as for my father, I would rather have adopted the name of “Friday,” and been known as the servant of some Robinson Crusoe, than to have taken his name. (Editor’s note: William Wells Brown’s father was a white man.)
END_OF_DOCUMENT_TOKEN_TO_BE_REPLACED