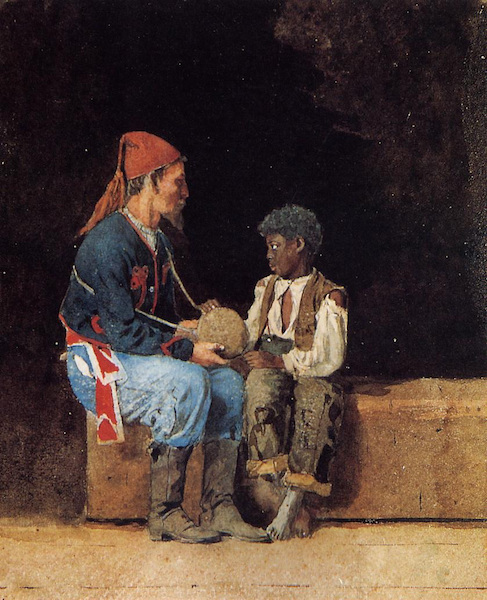 The American Civil War made for new and unexpected encounters between North and South. One of those is captured in Winslow Homer’s poignant 1875 watercolor painting Contraband, which features a Union soldier in a Zouave uniform and a runaway slave boy.

What did these two see in each other’s faces? This might be the first time that the white soldier sees a slave in the flesh. Understand that in 1860, less than 2% of the North’s population was of African descent; millions of northerners went their entire lives without ever seeing a negro. Slaves had been much talked about, but hardly seen except for press illustrations which typically represented them as big-lipped, dark-skinned caricatures. But as this soldier gazed upon the boy, he may have seen, not a cartoon image, but rather, the face of humanity. And so he was moved to this act of kindness, of sharing his water with the boy.

And what did the child, whose enslaved family had sought refuge behind Union lines, make of this man with the garish uniform and the funny accent? During the war, thousands of slaves heeded the advice of the grapevine telegraph that the United States army offered them freedom, if they could escape to Union lines. Having survived his family’s sojourn from bondage, the thirsty and exhausted boy with the curious and almost trepidatious look may have tasted not just water, but also, liberation and hope. Perhaps the boy thought that he might be a soldier himself one day. (Many black men who escaped bondage did become soldiers, and maybe even some boys.) END_OF_DOCUMENT_TOKEN_TO_BE_REPLACED