A 1/6 figurine depicting a Civil Ware era African American color/flag bearer.
Source: This is from the Spanish language site Acción Uno Seis: foro español di figuras de acción a escala 1/6 (Action One Six: A Spanish Forum for 1/6 scale action figures). It shows a Union sergeant who holds the tattered, but surviving, United States flag in the wake of a battle.
Created by: “egonzinc.” His full name is not indicated, although he is shown as being from Puerto Rico.

In Civil War armies, no duty was more honorable, or more dangerous, than that of the color, or flag, bearer. As noted here at About.com,

“Assault on the Rebel Works at Port Hudson, May 27,” Frank Leslie’s Illustrated Newspaper, June 27, 1863, p. 216-217. (Courtesy of the House Divided Project); romanticized illustration of the Battle at Port Hudson, which included African-descent troops from the Louisiana Native Guards.
Source: Courtesy of the House Divided Project

George Clinton Rowe (1853-1903) was an African American minister, newspaper publisher (in Charleston, SC), and poet. In his poem “The Reason Why,” he writes an ode to a flag bearer for the African descent regiments that fought at the Battle of Port Hudson:

The Reason Why
by George Clinton Rowe

It is the eve of battle;
The soldiers are in line;
The roll of drum and bugle blast
Marshal that army fine. END_OF_DOCUMENT_TOKEN_TO_BE_REPLACED 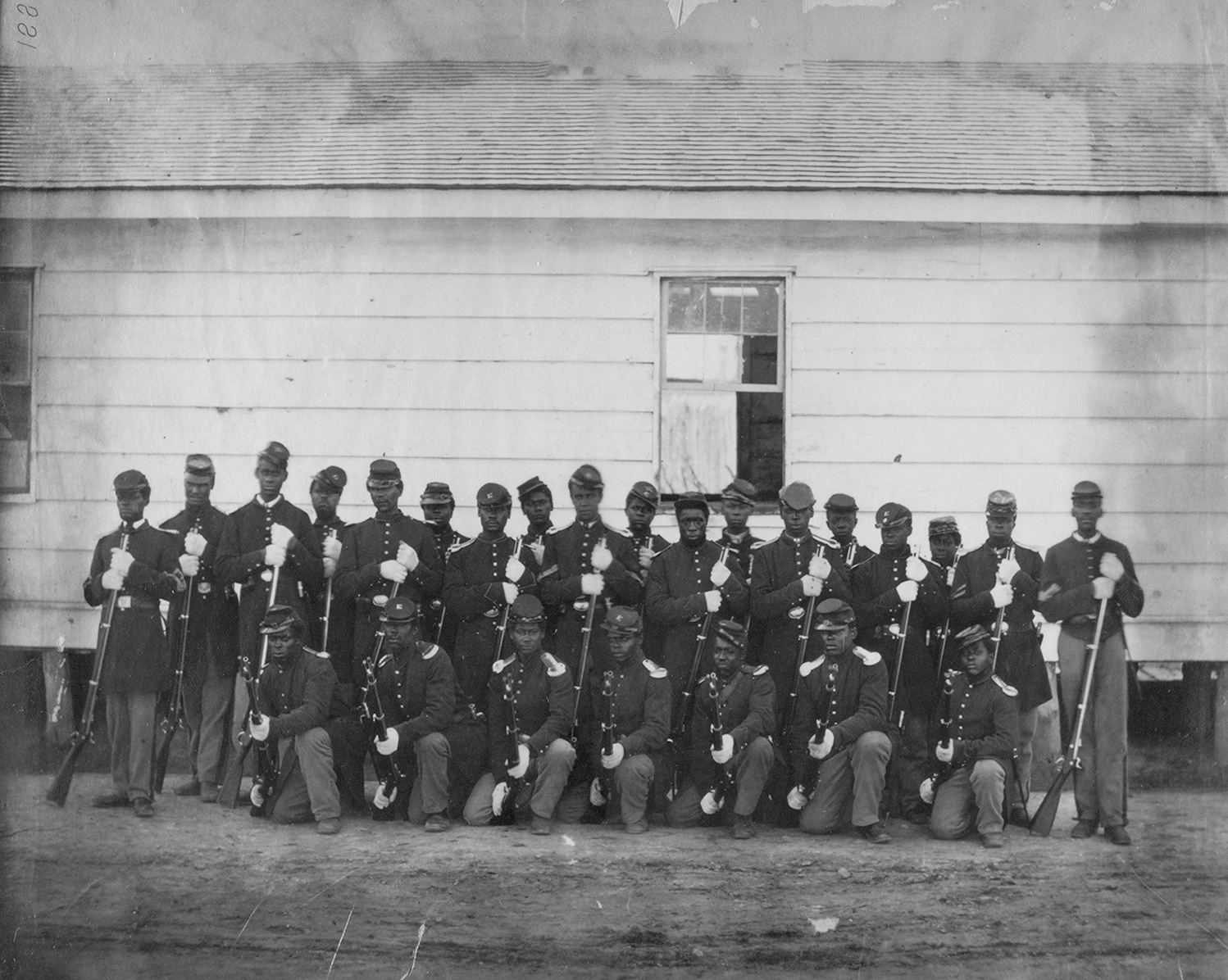 If the muse were mine to tempt it
And my feeble voice were strong,
If my tongue were trained to measures,
I would sing a stirring song.
I would sing a song heroic
Of those noble sons of Ham,
Of the gallant colored soldiers
Who fought for Uncle Sam!

In the early days you scorned them,
And with many a flip and flout
Said “These battles are the white man’s,
And the whites will fight them out.”
Up the hills you fought and faltered,
In the vales you strove and bled,
While your ears still heard the thunder
Of the foes’ advancing tread.

Then distress fell on the nation,
And the flag was drooping low;
Should the dust pollute your banner?
No! the nation shouted, No!
So when War, in savage triumph,
Spread abroad his funeral pall–
Then you called the colored soldiers,
And they answered to your call.

And like hounds unleashed and eager
For the life blood of the prey,
Sprung they forth and bore them bravely
In the thickest of the fray.
And where’er the fight was hottest,
Where the bullets fastest fell,
There they pressed unblanched and fearless
At the very mouth of hell.

Ah, they rallied to the standard
To uphold it by their might;
None were stronger in the labors,
None were braver in the fight.
From the blazing breach of Wagner
To the plains of Olustee,
They were foremost in the fight
Of the battles of the free.

And at Pillow! God have mercy
On the deeds committed there,
And the souls of those poor victims
Sent to Thee without a prayer.
Let the fulness of Thy pity
O’er the hot wrought spirits sway
Of the gallant colored soldiers
Who fell fighting on that day!

Yes, the Blacks enjoy their freedom,
And they won it dearly, too;
For the life blood of their thousands
Did the southern fields bedew.
In the darkness of their bondage,
In the depths of slavery’s night,
Their muskets flashed the dawning,
And they fought their way to light.

They were comrades then and brothers,
Are they more or less to-day?
They were good to stop a bullet
And to front the fearful fray.
They were citizens and soldiers,
When rebellion raised its head;
And the traits that made them worthy,–
Ah! those virtues are not dead.

They have slept and marched and suffered
‘Neath the same dark skies as you,
They have met as fierce a foeman,
And have been as brave and true.

And their deeds shall find a record
In the registry of Fame;
For their blood has cleansed completely
Every blot of Slavery’s shame.
So all honor and all glory
To those noble sons of Ham–
The gallant colored soldiers
Who fought for Uncle Sam!
****

Paul Laurence Dunbar was one of the first African-American poets to gain national critical acclaim. He was born in Dayton, Ohio, in 1872. His parents were ex-slaves from Kentucky. His father was an escaped slave who served in the 55th Massachusetts Infantry Regiment and the 5th Massachusetts Colored Cavalry Regiment during the Civil War.

Dunbar was the lone black student in his high school in Dayton. That did not prevent him from excelling in school, where he was a member of the debating society, editor of the school paper and president of the school’s literary society. Two of his high school classmates were Wilbur and Orville Wright, who invested in his newspaper the Dayton Tattler, which was aimed at the city’s black community.

Dunbar died young, at the age of 33, due to tuberculosis. Even so, he created a huge body of work, including poetry, short stories and novels. He was also a lyricist for the musical comedy In Dahomey which was the first full-length musical written and performed by blacks to be booked into a Broadway theater. The play included the talents of fellow lyricist James Weldon Johnson and the vaudeville stars Bert Williams and George Walker. Although Dunbar predated the Harlem Renaissance/New Negro era of the 1920s and 1930s, his work certainly inspired the people of those times.