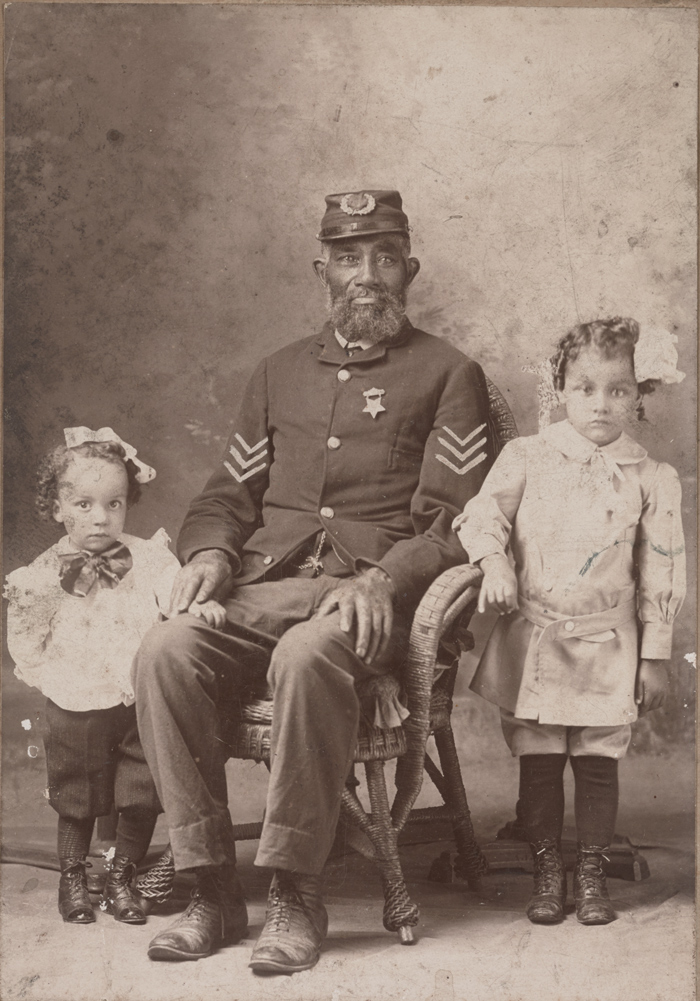 The Library of Congress has a great archive of photographs which includes these wonderful portraits of African American Civil War veterans. These men are shown wearing clothing and accoutrements of the Grand Army of the Republic, or G. A. R. The G. A. R. was a nation-wide organization for Union veterans of the Civil War. END_OF_DOCUMENT_TOKEN_TO_BE_REPLACED 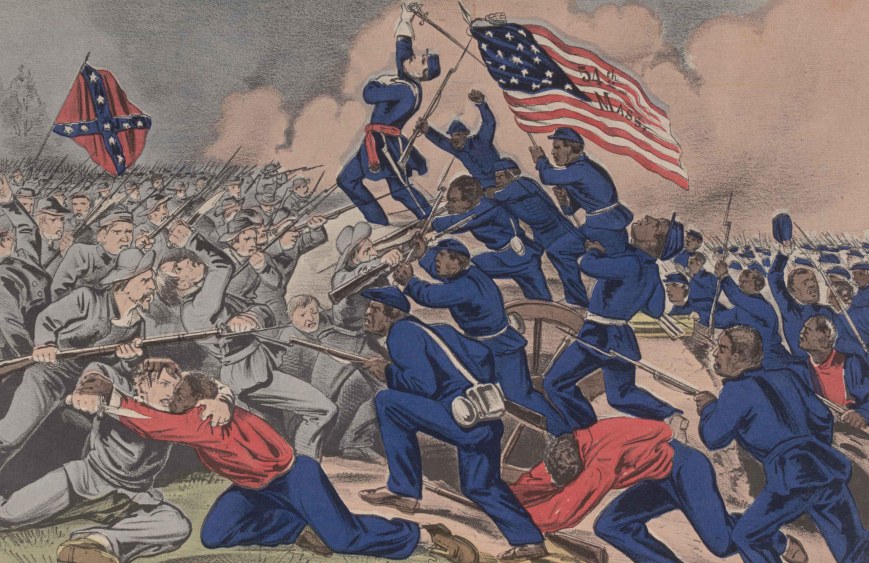 The 4th of July is one of the important dates in US history. We Americans celebrate the clarion call to liberty and equality as stated by the American Patriots in the Declaration of Independence:

We hold these truths to be self-evident, that all men are created equal, that they are endowed by their Creator with certain unalienable Rights, that among these are Life, Liberty and the pursuit of Happiness.–That to secure these rights, Governments are instituted among Men, deriving their just powers from the consent of the governed, –That whenever any Form of Government becomes destructive of these ends, it is the Right of the People to alter or to abolish it, and to institute new Government, laying its foundation on such principles and organizing its powers in such form, as to them shall seem most likely to effect their Safety and Happiness.

But I am reminded that, throughout our history, this ideal of liberty and equality was not universally held. During the American Civil War, that portion of the Declaration was explicitly rejected by the Confederate States of America, the breakaway nation formed by secessionist slaveholding states. Consider the words of Alexander Stephens, the Vice-President of the Confederate States of America, in his famous “Corner Stone Speech”:

The new (Confederate) constitution has put at rest, forever, all the agitating questions relating to our peculiar institution African slavery as it exists amongs us the proper status of the negro in our form of civilization. This was the immediate cause of the late rupture and present revolution.

(Former President Thomas) Jefferson… had anticipated this as the “rock upon which the old Union would split.” He was right. What was conjecture with him, is now a realized fact. But whether he fully comprehended the great truth upon which that rock stood and stands, may be doubted. The prevailing ideas entertained by him and most of the leading statesmen at the time of the formation of the old constitution, were that the enslavement of the African was in violation of the laws of nature; that it was wrong in principle, socially, morally, and politically. It was an evil they knew not well how to deal with, but the general opinion of the men of that day was that, somehow or other in the order of Providence, the institution would be evanescent and pass away. This idea, though not incorporated in the constitution, was the prevailing idea at that time. The constitution, it is true, secured every essential guarantee to the institution while it should last, and hence no argument can be justly urged against the constitutional guarantees thus secured, because of the common sentiment of the day.

Those ideas, however, were fundamentally wrong. They rested upon the assumption of the equality of races. This was an error. It was a sandy foundation, and the government built upon it fell when the “storm came and the wind blew.”

Our new (Confederate) government is founded upon exactly the opposite idea; its foundations are laid, its corner- stone rests, upon the great truth that the negro is not equal to the white man; that slavery subordination to the superior race is his natural and normal condition. This, our new government, is the first, in the history of the world, based upon this great physical, philosophical, and moral truth.

Many people say this clash between the competing visions of a free society and a slave society led to an irresistible conflict within the body politic of the United States, a conflict that Confederates hoped to resolve by simply breaking away from the Union. But they did not reckon with the desire of Union men to preserve the United States in the face of the secessionist threat.

In 1865, President Abraham Lincoln said during his second Inaugural Address:

On the occasion corresponding to this four years ago… One-eighth of the whole population were colored slaves, not distributed generally over the Union, but localized in the southern part of it. These slaves constituted a peculiar and powerful interest. All knew that this interest was somehow the cause of the war.

Neither party expected for the war the magnitude or the duration which it has already attained. Neither anticipated that the cause of the conflict (i.e., slavery) might cease with or even before the conflict itself should cease. Each looked for an easier triumph, and a result less fundamental and astounding. Both read the same Bible and pray to the same God, and each invokes His aid against the other. It may seem strange that any men should dare to ask a just God’s assistance in wringing their bread from the sweat of other men’s faces, but let us judge not, that we be not judged.

The prayers of both could not be answered. That of neither has been answered fully. The Almighty has His own purposes. “Woe unto the world because of offenses; for it must needs be that offenses come, but woe to that man by whom the offense cometh.” If we shall suppose that American slavery is one of those offenses which, in the providence of God, must needs come, but which, having continued through His appointed time, He now wills to remove, and that He gives to both North and South this terrible war as the woe due to those by whom the offense came, shall we discern therein any departure from those divine attributes which the believers in a living God always ascribe to Him?

Fondly do we hope, fervently do we pray, that this mighty scourge of war may speedily pass away. Yet, if God wills that it continue until all the wealth piled by the bondsman’s two hundred and fifty years of unrequited toil shall be sunk, and until every drop of blood drawn with the lash shall be paid by another drawn with the sword, as was said three thousand years ago, so still it must be said “the judgments of the Lord are true and righteous altogether.”

It is certainly true that much wealth was gotten by “two hundred and fifty years of unrequited toil” from the bondsmen. But I don’t know if the Civil War was a providential judgment, a cosmic/karmic phenomenon in which “the offenses of the North and South” resulted in “every drop of blood (that was) drawn with the lash (being) paid by another drawn with the sword.”

I have noticed that some people find discomfort or even fault with the way that slavery finally ended in the United States. They correctly note that the United States went to war to preserve the Union, not to end slavery. The downfall of slavery was an unanticipated outcome that came only because a long and bloody war forced the Union to offer freedom to the enslaved, so they would join the fight to destroy the Confederacy. For some folks, the demise of slavery is tainted by the lack of original intent on the Union’s part to end bondage at the outset of the war.

And maybe it was serendipity. Perhaps it was mere luck that a Confederate nation-state founded on principles “opposite” to those of the Declaration of Independence would fall, with the “fundamental and astounding” results that the conflict between slavery and liberty would be resolved in favor of liberty, and that the wealth piled by the bondmen’s toil would be lost to the slaveholders.

What we can say is that the ante-bellum conflict between the ideal of liberty and equality for all men and the race-based privilege of holding property in man came to a sudden end with the defeat of the Confederacy. We can say that almost 4 million people gained their freedom out of the carnage of war, just as the American patriots gained their independence from the carnage of war many decades earlier. Perhaps the United States did stumble, unintentionally, into ending human bondage. I like to tell people that, it’s something that could only happen in America… the United States of America. If the USA can continue to hold to the ideals of the Declaration of Independence, maybe we won’t need this kind of luck ever again.