Paul Laurence Dunbar was an African-American poet who gained national prominence in the late 19th/early 20th centuries. Born in 1872, he was raised in Dayton, Ohio, where he was the lone black student in his high school. His father was an escaped slave from Kentucky who served in the 55th Massachusetts Infantry Regiment and the 5th Massachusetts Colored Cavalry Regiment during the Civil War.

In 1901, Dunbar published Candle-Lightin’ Time. The book was an artistic calloboration, featuring poems by Dunbar, photographs by Leigh Richmond Miner of the Hampton Institute Camera Club, and illustrated decorations by Margaret Armstrong. The work includes an ode to African American Civil War soldiers titled When Dey Listed Colored Soldiers, which is presented further below along with photographs from the book. The poem was no doubt inspired by his father.

The poem is interesting in that, while centering on the suffering and loss of a black mother for her son, it also speaks to the suffering of a white Confederate family. The poem’s narrator is the mother of a black Union soldier, but also, has a slave master who served in the Confederacy, along with the master’s son. Both master and son would feel the pain and anguish of war. In this, the slave mother and her mistress would share a bond that transcended race, section, and politics.

Candle-Lightin’ Time features other, non-Civil War content and makes for a fine read not only for its poetry but for its photographs.

Dunbar died in Dayton, Ohio at the age of 33 from tuberculosis.

Dey was talkin’ in de cabin, dey was talkin’ in de hall;
But I listened kin’ o’ keerless, not a-t’inkin’ ’bout it all;
An’ on Sunday, too, I noticed, dey was whisp’rin’ mighty much,
Stan’in’ all erroun’ de roadside w’en dey let us out o’ chu’ch.
But I did n’t t’ink erbout it ‘twell de middle of de week,
An’ my ‘Lias come to see me, an’ somehow he couldn’t speak.
Den I seed all in a minute whut he’d come to see me for; –
Dey had ‘listed colo’ed sojers, an’ my ‘Lias gwine to wah. 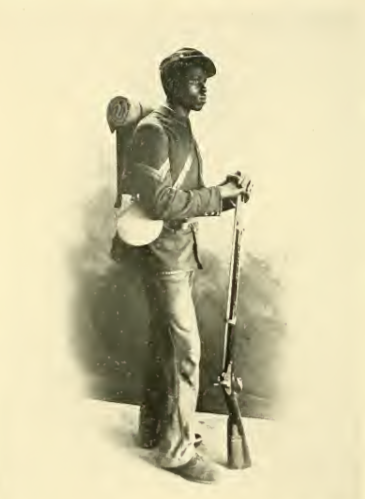 But I t’ought of all de weary miles dat he would have to tramp,
An’ I could n’t be contented w’en dey tuk him to de camp.
W’y, my hea’t nigh broke wid grievin’ twell I seed him on de street;
Den I felt lak I could go an’ th’ow my body at his feet.
For his buttons was a-shinin’, an’ his face was shinin’, too,
An’ he looked so strong an’ mighty in his coat o’ sojer blue,
Dat I hollahed, “Step up, manny,” dough my th’oat was so’ an’ raw,-
W’en dey ‘listed colo’ed sojers an’ my ‘Lias went to wah.

Ol’ Mis’ cried w’en mastah lef’ huh, young Miss mou’ned huh brothah Ned,
An’ I did n’t know dey feelin’s is de ve’y wo’ds dey said
W’en I tol’ ’em I was so’y. Dey had done gin up dey all;
But dey only seem mo’ proudah dat dey men had hyeahd de call.
Bofe my mastahs went in gray suits, an’ I loved de Yankee blue,
But I t’ought dat I could sorrer for de losin’ of ’em too;
But I could n’t, for I did n’t know de ha’f o’ whut I saw,
‘Twell dey ‘listed colo’ed sojers an’ my ‘Lias went to wah.

Mastah Jack come home all sickly; he was broke for life, dey said;
An’ dey lef’ my po’ young mastah some’r’s on de roadside, – dead.
W’en de women cried an’ mou’ned ’em, I could feel it thoo an’ thoo,
For I had a loved un fightin’ in de way o’ dangah, too.
Den dey tol’ me dey had laid him some’r’s way down souf to res’,
Wid de flag dat he had fit for shinin’ daih acrost his breas’.
Well, I cried, but den I reckon dat’s what Gawd had called him for
W’en dey ‘listed colo’ed sojers an’ my ‘Lias went to wah. 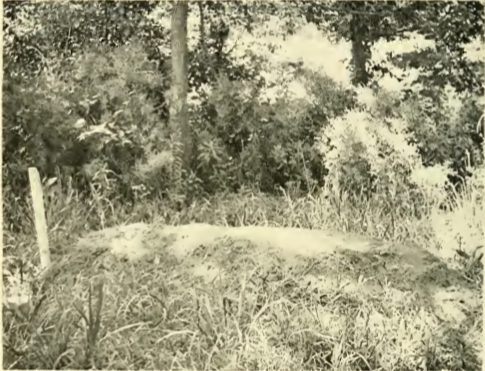 This video excerpt, from the 1990 video “The Eyes of the Poet,” features Herbert Woodward Martin performing the poetry of Paul Laurence Dunbar. Dr. Martin, University of Dayton professor emeritus, is an acclaimed scholar and interpreter of Dunbar’s works.
University of Dayton; Published on Oct 14, 2014