This is a photograph of Union war veteran James Brown, who is identified as having been born in 1832. This image is dated May 1936; Brown would have been over 100 years old at the time.

Brown is wearing what might be a Grand Army of the Republic (G.A.R.) badge, hanging from his top jacket button. The G.A.R. was a Union veterans organization that was formed after the Civil War.

Lincoln was the man who enabled men like Brown to take arms and fight for freedom and Union. Both of them paved the way for the America we have today.  For a country that aspires to be the land of the free and the home of the brave, these two men made a difference. As Brown perhaps ponders Lincoln’s place in history, we can ponder Brown’s place as well.

Possibly an Honor Escort for a deceased private at L’Ouverture Hospital, in Alexandria, Virginia; probably taken between early December 1864 to early April 1865. The group includes a corporal, eight infantryman, a drummer, and a fifer; and at far right, Reverend Chauncey Leonard, the Hospital’s Chaplain.
Source: Unattributed image from CivilWarTalk.com. A colorized version of the  image, with detailed information about the image (including the names of the soldiers) is here.

This is a very interesting Civil War image featuring a group African American soldiers and musicians, and at far left, a hospital chaplain, Reverend Chauncey Leonard. Leonard worked at L’Overture Hospital in Alexandria, Virginia, which was “specially constructed to care for sick and wounded African American soldiers, who were kept segregated from their white comrades.” The hospital was named for Haitian revolutionary leader Toussaint L’Ouverture.

Details on the image, including the names of each of the soldiers, is here.

This webpage at CivilWarTalk.com has enlistment and other information about some of the soldiers who are in the photograph.

Saluting the flag at the Whittier Primary School, Hampton, Virginia, circa 1899 – 1900;  Frances Benjamin Johnston, 1864-1952, photographer. Click on the image for a larger/higher resolution version of the photograph.
Image Source: Library of Congress, Reproduction Number: LC-USZ62-65770; see here for more details

This picture was taken in 1899 or 1900, just as the full force of segregation was tightening itself around the necks of African Americans – sometimes in a literal way.

Yet, these children – or their parents and teachers – still saw fit to salute the flag. But then, that flag might have freed their parents or grandparents from bondage in the wake of the American Civil War. Some of them might have had family who served in the Union army or navy, or who provided labor to the army at nearby Fort Monroe. So the United States flag was still something to respect and cherish, perhaps even without a sense of irony.

The Whittier School for children was “used as a practice ground for teaching students of the Hampton Normal School” (“Normal Schools” were schools for teachers), which was part of Hampton Institute, in Hampton, Virginia. Hampton Institute was one of many institutions established after the war to provide education and training to the former slaves as they made the transition to free citizens. 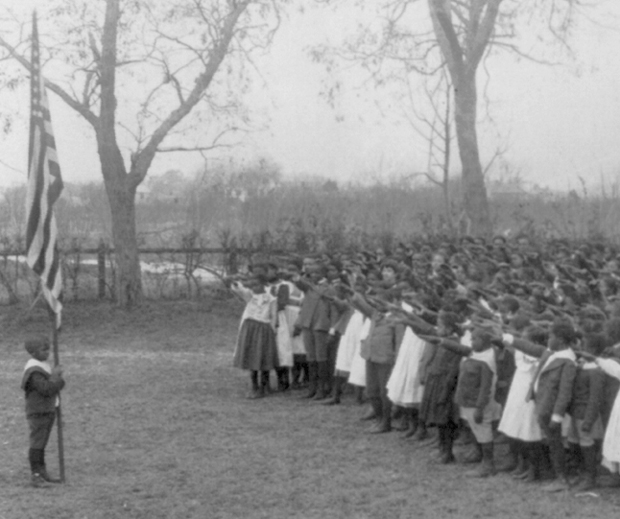 Close-up on boy holding the flag

See also A Field Trip to the Freedom Fortress by Hampton Institute Students.

Fort Monroe, just outside modern day Hampton, Virginia, was a Union military base where three African American men – Frank Baker, Shepard Mallory and James Townsend – escaped to freedom early in the Civil War. In return for giving their labor to the Union, the US Army Major General Benjamin Butler gave them asylum from bondage  Those men blazed a trail that would eventually lead to freedom for millions of bondsmen.

After the war, numerous schools were founded as places where freedmen and women could improve themselves through education and training. Thus was born Hampton Normal and Agricultural Institute, which today is called Hampton University. At the turn of the century (19th to 20th), these Institute students visited the place that was known to escaping slaves – perhaps their mothers and fathers – as the Freedom Fortress. 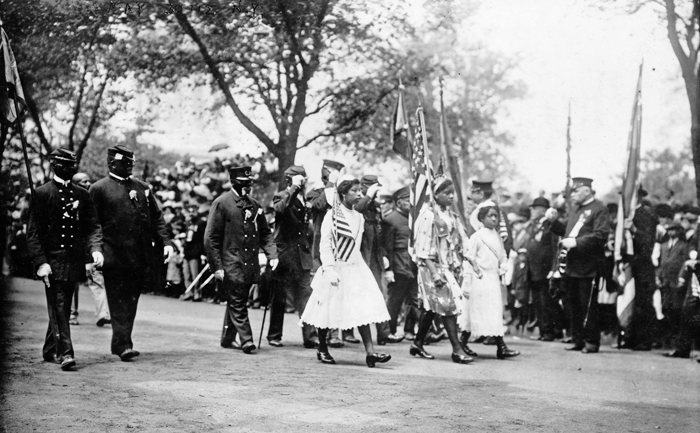 This is a photograph of black Civil War veterans, and family and friends, marching in a Grand Army of the Republic parade in New York in the early twentieth century. The Grand Army of the Republic (GAR) was an organization of United States (Union) veterans of the Civil War, including men from the Army, Navy, Marines and Revenue Cutter Service. Wikipedia discusses the GAR:

After the end of American Civil War, organizations were formed for veterans to network and maintain connections with each other. Many of the veterans used their shared experiences as a basis for fellowship. Groups of men began joining together, first for camaraderie and later for political power. Emerging as most influential among the various organizations was the Grand Army of the Republic, founded on April 6, 1866, on the principles of “Fraternity, Charity and Loyalty,” in Decatur, Illinois, by Benjamin F. Stephenson.

The GAR initially grew and prospered as a de facto political arm of the Republican Party during the heated political contests of the Reconstruction era. The commemoration of Union veterans, black and white, immediately became entwined with partisan politics. The GAR promoted voting rights for black veterans, as many veterans recognized their demonstrated patriotism. Black veterans, who enthusiastically embraced the message of equality, shunned black veterans’ organizations in preference for racially inclusive groups. But when the Republican Party’s commitment to reform in the South gradually decreased, the GAR’s mission became ill-defined and the organization floundered. The GAR almost disappeared in the early 1870s, and many divisions ceased to exist.

This is a wonderful photograph of an integrated GAR post. The post, New York post number 160, was located in Cazenovia, New York, which is near Syracuse. The picture was taken around 1900, roughly 35 years after the end of the war. The image of these black and white soldiers, with its staging of a black man holding the American flag in the center of the shot, has a poignancy which reaches over a hundred years of time, and touches me today.

These men might not have known each other during the war, because Union regiments were segregated. Although, during the course of the war, different soldiers from different regiments often fought alongside each other at particular sites. But GAR units like this one might have been the first opportunity for black and white soldiers to meet, greet, and perhaps, become friends.

The Public Broadcasting Service (PBS) show “History Detectives” devoted a program segment to a discussion of the photo, the GAR, and race in the Civil War. A transcript of the segment, which aired in July 2007, is here. Thanks to the blog Syracuse.com for providing the link and the photograph, and additional information. 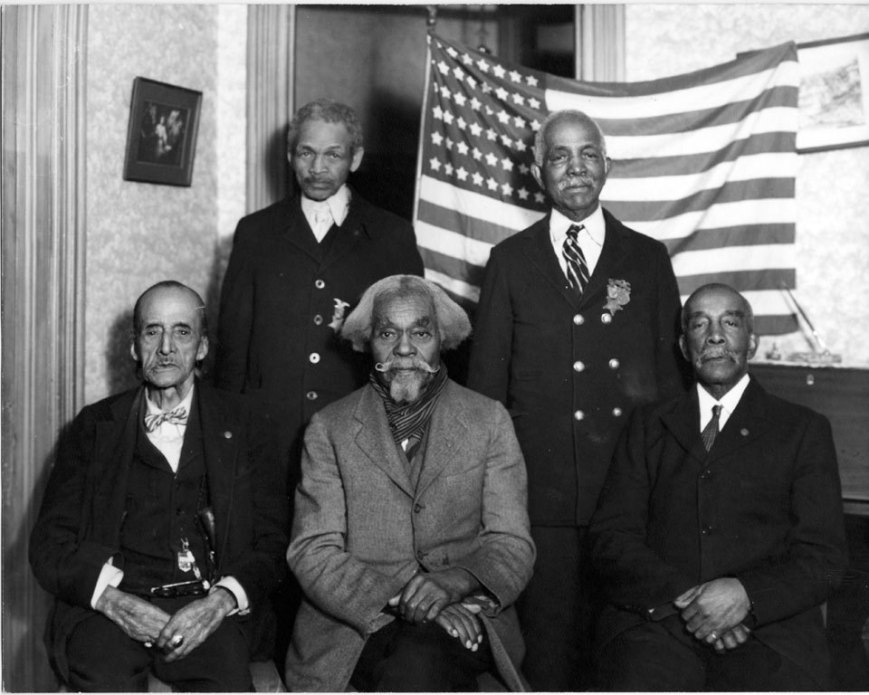 Blackface is a form of theatrical makeup used by performers to represent a black person. The practice gained popularity during the 19th century and contributed to the proliferation of stereotypes such as the “happy-go-lucky darky on the plantation” or the “dandified coon”. In 1848, blackface minstrel shows were an American national art of the time, translating formal art such as opera into popular terms for a general audience. Early in the 20th century, blackface branched off from the minstrel show and became a form in its own right, until it ended in the United States with the U.S. Civil Rights Movement of the 1960s. END_OF_DOCUMENT_TOKEN_TO_BE_REPLACED

This very curious Civil War era photograph was taken in Richmond, Virginia. The  city had been the Capitol of the Confederate States of America, but in April 1865, it was captured and occupied by Union troops. In the wake of the attack on the city, damage was done to its infrastructure. Some of the damage was done by evacuating Confederate military, to limit the use that the Union army could make of the place.

Alexander Gardner, one of the War’s famed photographers, took this photograph of several African American females and a European American boy near the ruins of the Richmond & Petersburg railroad bridge. The picture was taken at an island in the James River, which flows through the city. The face of the girl in the rear is clouded, probably from shaking her face while the photo was taken. The boy is wearing what appears to be a soldier’s cap; if so, this is a very interesting way to represent the Union army’s presence.

The women might have been enslaved when Richmond fell to federal forces; here they were, in their first days of freedom, posing for a photograph in view of their city’s ruins. Don’t forget about us, they say silently to the camera, and to history. Soon after, they, the rest of the city, and the rest of the South, would go through the process of putting the pieces back together and reconstructing a new South. 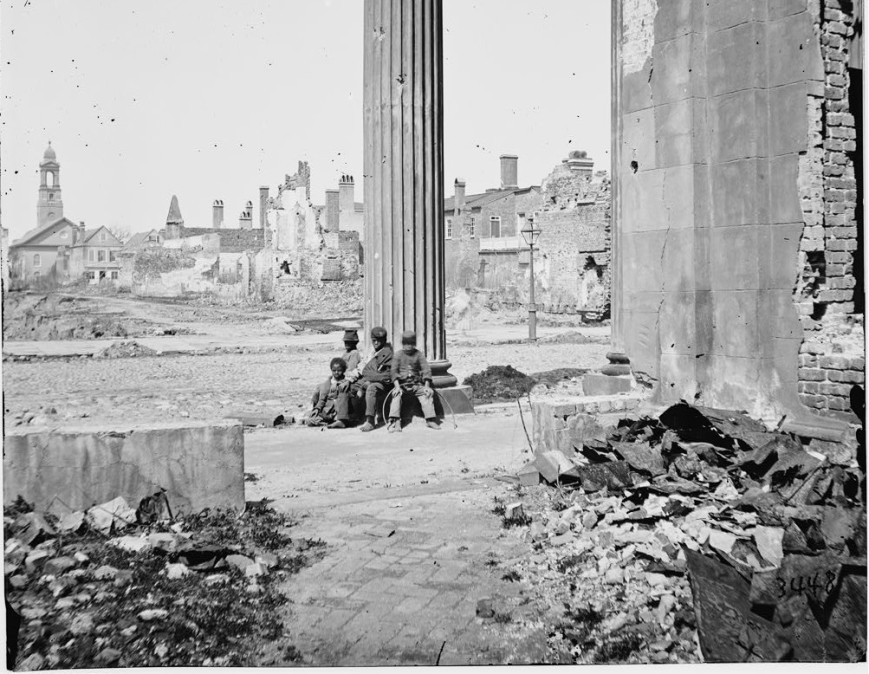 On December 11th of 1861, a massive fire burned 164 acres of the city, destroying the Cathedral of St. Finbar, the Circular Congregational Church and South Carolina Institute hall, and nearly 600 other buildings. Much of the damage remained un-repaired until the end of the war…

In 1863, the Union began an offensive campaign against the defenses of Charleston Harbor, beginning with a combined sea-land engagement. The naval bombardment accomplished little however, and the land forces were never put ashore. By summer of 1863, the Union turned its attention to Battery Wagner on Morris Island, which guarded the harbor entrance from the southwest. In the First and Second battles of Fort Wagner, Union forces suffered heavy losses in a failed attempt to capture the fort. A siege however resulted in Confederate abandonment of Fort Wagner by September of that year. An attempt to recapture Fort Sumter by a naval raiding party also failed badly, but Ft. Sumter was gradually reduced to rubble via bombardment from shore batteries, after the capture of Morris Island.

With the development of newer, longer-range artillery, and as Union forces were able to place batteries even closer to the city, a bombardment began in late 1863 that continued on and off for more than a year. The cumulative effects of this bombardment would destroy much of the city that had survived the fire. A coordinated series of attacks on the city were launched in early July 1864, including an amphibious assault on Fort Johnson and an invasion of Johns Island. These attacks failed, but they continued to wear down the city’s defenders. The defenders were finally beaten back and the Union was able to capture the city of Charleston, only a month and a half before the war ended.

As Gen. Sherman marched through South Carolina, the situation for Charleston became ever more precarious. On February 15, 1865, Gen. Beauregard ordered the evacuation of remaining Confederate forces. On February 18, the mayor surrendered the city to General Alexander Schimmelfennig; and Union troops finally moved in, taking control of many sites, such as the U.S. Arsenal (which the Confederate States had seized at the outbreak of the war).

Ruins from the fire of 1861, seen from the Circular Church in Charleston, 1865 by Mathew Brady
Image Source: Wikipedia Commons; Licensed under Public Domain via Commons. 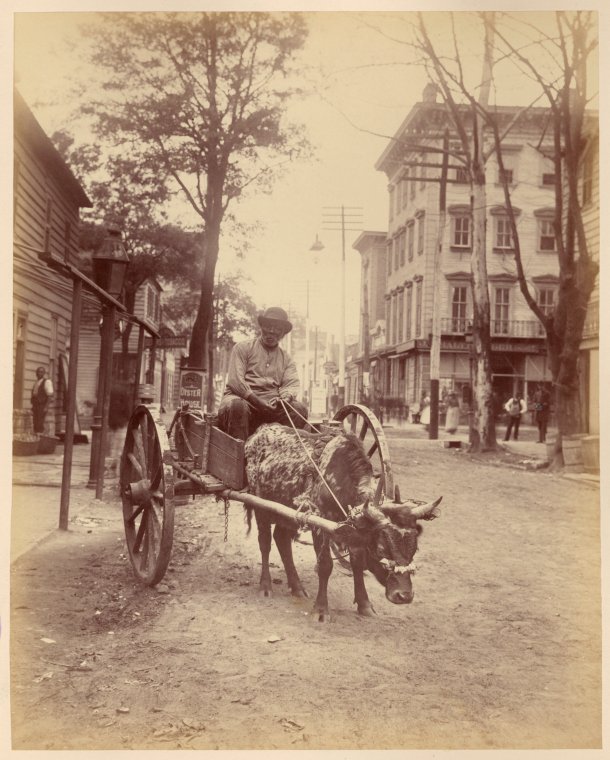 The American Civil War and the end of slavery wrought a sweeping transformation upon Savannah, Georgia, as they did on almost all the South. In her book Saving Savannah: The City and the Civil War, pages 347-8, historian Jacqueline Jones writes about how African Americans in Savannah experienced their new-found freedom by making reference to records from the 1870 Census. Her text gives an insight into the world that the man above entered in the wake of Jubilee in the post-war South: END_OF_DOCUMENT_TOKEN_TO_BE_REPLACED