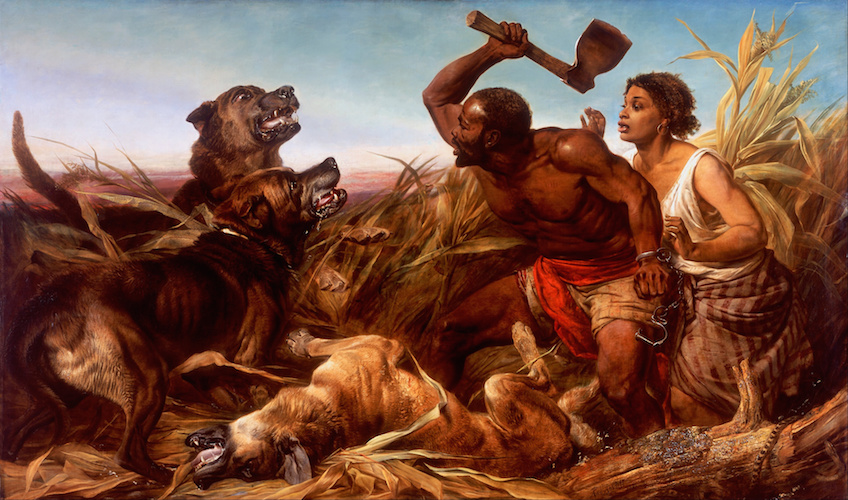 “The Hunted Slaves,” 1861, by English artist Richard Ansdell
From here: “Painted in 1861, the year of the outbreak of the American Civil War, this picture portrays two runaway slaves, turning to face the pack of mastiffs which has pursued them. When the painting was first exhibited the artist included a quotation in the catalogue from the Henry Wadsworth Longfellow poem ‘The Dismal Swamp,’ which describes the flight of an escaped slave. The painting… is now in the ‘Legacies’ section of the International Slavery Museum.”
Image Source: Wikimedia Commons

“Slaves Waiting for Sale Richmond, Virginia,” 1861, by English artist Eyre Crowe
From here: “Inspired and outraged by a visit he made to slave auction rooms in Richmond, Crowe commemorated the subject first in an engraved sketch which appeared in the Illustrated London News on 27 September 1856 (Slave Auction at Richmond, Virginia), and then by this oil painting which was exhibited at the British Academy in 1861. The original sketch, made on 3 March 1853, was published by Crowe in his book ‘With Thackeray in America’… “Slaves Waiting for Sale” is now held in the Heinz private collection in Washington D.C., United States.”
Image Source: Eyre Crowe.com; a high-resolution image is here.

The above paintings are icons of anti-slavery art, although quite different in their approach to the subject. Both pictures are the work of English artists; they show that interest in American slavery and anti-slavery extended beyond the boundaries of the United States. Both were made just as the American Civil War was beginning; these artists may have perceived that the war was about slavery, and were keen to show the stakes involved.

The first painting, by Richard Ansdell, features a number of anti-slavery tropes (trope = commonly recurring literary or rhetorical device, motif, or cliché):
• chains, which represent slavery and the loss of physical and personal freedom
• a partially clothed male slave; this signifies that the slave has been stripped of his modesty and dignity, and of the indicators of culture and civilization that clothing brings the body
• dogs, which represent the savagery and brutality used to maintain institutional bondage

In this picture, the male is depicted as strong and brave. He places himself between the dogs and the female figure, putting himself in mortal danger to protect her. He is an exemplar of manhood, in a time when notions of manhood were very important in the culture. Male slaves were considered to be docile, subservient, and lacking in manhood, so this picture is a striking rejection of the common view of the enslaved African man.

The female in the picture is slightly but noticeably lighter in skin color than the male. Is she a mulatto? Was the female intended to symbolize the defilement of slave women and the creation of mixed blood and enslaved/abandoned slave progeny? Perhaps.

Although the image is a scene of resistance, the outcome of the encounter is unknown. The dogs are a formidable force, and might not be overcome by the fugitives. And also, the dogs are merely the leading edge of some number of men who are out to recover the escaped property. The act of resistance itself could lead to loss of limb or even life; if captured, the slaves might be much worse off than if they had not tried to escape. All that we know is that the slaves are putting up a good fight. This individual act of resistance notwithstanding, there is no indication that the institution of slavery is itself at risk.

The second painting, from Eyre Crowe, offers a sharp contrast to the first one. Slaves Waiting for Sale features a group of slaves at an auction house in Richmond, Virginia. Richmond was a major terminus in the slave trade industry.

The women in the painting are nicely dressed, to make them more attractive to buyers. In many cultures “dressing up” is a way to gain the eye of a potential suitor. But here, the slaves’ beautification is a selling technique that might have forced or reinforced the notion that they were property. For the slaves, dressing up was commercial packaging.

Off to the side of the women is a black male. His discomfort and dejection are obvious. Far from being the women’s protector, he is passive and inactive. His arms do not hold a weapon; they are folded inward, of no use to himself or the women… but they will be unfolded and made useful to his new master. Commodified, emasculated, and pathetic, all he can do is stare glumly into the future.

The women in the picture do not even look at him. It is like he is an invisible man; lacking any real manhood, perhaps there is nothing to see. Or perhaps they feel his pain and shame, and in the spirit of the moment, do not make his situation any worse by bringing more attention to it. Or perhaps they feel a boiling anger in him, and it’s too uncomfortable to look at. For whatever reason, he is so close to the women, yet emotionally isolated from them in his own separate space.

One of the more poignant parts of the picture is the slave children. This sale could very well be the last time these family members will see each other in life. The scene presages a possible loss of family, and with it, a loss innocence. This could be the first time that the children understand themselves to be things, not people.

Taken together, the paintings are a yin and yang of anti-slavery art metaphors. One image is imagined and heroic; the other is somber and realistic. One shows how we wish slaves would be: brave, assertive, and freedom-seeking in the face of huge odds. The other shows slaves as constrained, controlled, and resigned to a system that takes away their manhood, families, and humanity, as well as their freedom.

But that was in 1861. Within the space of several years, artists would find new themes to illustrate the lives of people once held as slaves, such as this one.