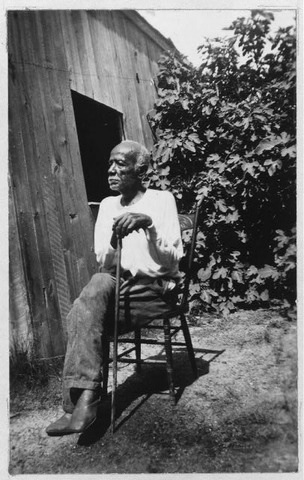 Martin Jackson had a long and interesting life. As a slave during the Civil War, he rescued Confederate wounded from the battlefield – he was an “official lugger-in of men,” he called himself. Much later, during World War I, he enlisted as a cook! This is not a story you will hear much.

Jackson was a long time resident of Texas. At the age of 90, he was interviewed about his life as a slave for the Federal Writers’ Project of the Depression-era Works Progress Administration. He recalled his early life, mentioned the “good treatment” he enjoyed as a house slave, spoke about the difficulty of telling the true story of slavery to strangers (such as, perhaps, those who conducted these slave interviews for the WPA), and his experiences during the Civil War.

Some have applied the label “black Confederate” to men like Jackson, saying that they “served” the Confederacy. But Jackson’s comments provide a much more complex understanding of his “service.” Rather than characterize his statements in any way, I will let Jackson’s words speak for themselves.

This is an abridged and edited version of the WPA interview. Mainly, I have moved paragraphs around so that they follow a linear timeline; the original interview skipped all over the place in time. Here it is:

“My earliest recollection is the day my old boss presented me to his son, Joe, as his property. I was about five years old and my new master was only two.

“Lots of old slaves closes the door before they tell the truth about their days of slavery. When the door is open, they tell how kind their masters was and how rosy it all was. You can’t blame them for this, because they had plenty of early discipline, making them cautious about saying anything uncomplimentary about their masters. I, myself, was in a little different position than most slaves and, as a consequence, have no grudges or resentment. However, I can tell you the life of the average slave was not rosy. They were dealt out plenty of cruel suffering.

“Even with my good treatment, I spent most of my time planning and thinking of running away. I could have done it easy, but my old father used to say, ‘No use running from bad to worse, hunting better.’ Lots of colored boys did escape and joined the Union army, and there are plenty of them drawing a pension today. My father was always counseling me. He said, ‘Every man has to serve God under his own vine and fig tree.’ He kept pointing out that the War wasn’t going to last forever, but that our forever was going to be spent living among the Southeners, after they got licked. He’d cite examples of how the whites would stand flatfooted and fight for the blacks the same as for members of their own family. I knew that all was true, but still I rebelled, from inside of me. I think I really was afraid to run away, because I thought my conscience would haunt me. My father knew I felt this way and he’d rub my fears in deeper. One of his remarks still rings in my ears: ‘A clear conscience opens bowels, and when you have a guilty soul it ties you up and death will not for long desert you.’

“No, sir, I haven’t had any education. I should have had one, though. My old missus was sorry, after the War, that she didn’t teach me. Her name, before she married my old master, was Mrs. Long. She lived in New York City and had three sons. When my old master’s wife died, he wrote up to a friend of his in New York, a very prominent merchant named C.C. Stewart. He told this friend he wanted a wife and gave him specifications for one. Well, Mrs. Long, whose husband had died, fitted the bill and she was sent down to Texas. She became Mrs. Fitzpatrick. She wasn’t the grandmother of Governor Ferguson. Old Fitzpatrick had two wives that preceded Mrs. Long. One of the wives had a daughter named Fanny Fitzpatrick and it was her that was the Texas’ governor’s mother.

“I seem to have the complicated family tree of my old master more clear than I’ve got my own, although mine can be put in a nutshell: I married only once and was blessed in it with 45 years of devotion. I had 13 children and a big crop of grandchildren.

“I was here in Texas when the Civil War was first talked about. I was here when the War started and followed my young master into it with the First Texas Cavalry. I was here during reconstruction, after the War. I was here during the European World War and the second week after the United States declared war on Germany I enlisted as cook at Camp Leon Springs.

“This sounds as if I liked the war racket. But, as a matter of fact, I never wore a uniform grey coat or khaki coat or carried a gun, unless it happened to be one worth saving after some Confederate soldier got shot. I was official lugger-in of men that got wounded, and might have been called a Red Cross worker if we had had such a corps connected with our company. My father was head cook for the battalion and between times I helped him out with the mess. There was some difference in the food served to soldiers in 1861 and 1917!

“Just what my feelings was about the Civil War, I have never been able to figure out myself. I knew the Yanks were going to win, from the beginning. I wanted them to win and lick us Southerners, but I hoped they was going to do it without wiping out our company. I’ll come back to that in a minute. As I said, our company was the First Texas Cavalry. Col. Buchell was our commander. He was a full-blooded German and as fine a man and a soldier as you ever saw. He was killed at the Battle of Marshall and died in my arms. You may also be interested to know that my old master, Alvy Fitzpatrick, was the grandfather of Governor Jim Ferguson.

“It was in the Battle of Marshall, in Louisiana, that Col. Buchell got shot. I was about three miles from the front, where I had pitched up a kind of first-aid station. I was all alone there. I watched the whole thing. I could hear the shooting and see the firing. I remember standing there and thinking the South didn’t have a chance. All of a sudden I heard someone call. It was a soldier, who was half carrying Col. Buchell in. I didn’t do nothing for the Colonel. He was too far gone. I just held him comfortable, and that was the position he was in when he stopped breathing. That was the worst hurt I got when anybody died. He was a friend of mine. He had had a lot of soldiering before and fought in the Indian War.

“Well, the Battle of Marshall broke the back of the Texas Cavalry. We began straggling back towards New Orleans, and by that time the War was over. The soldiers began to scatter. They was a sorry-lookin’ bunch of lost sheep. They didn’t know where to go, but most of ’em ended up pretty close to the towns they started from. They was like homing pigeons, with only the instinct to go home and, yet, most of them had no homes to go to.

“We lived on a ranch of about 1,000 acres close to the Jackson County line in Victoria County, about 125 miles from San Antonio. Just before the war ended they sold the ranch, slaves and all, and the family, not away fighting, moved to Galveston. Of course, my father and me wasn’t sold with the other blacks, because we was away at war.

“My mother was drowned years before when I was a little boy. I only remember her after she was dead. I can take you to the spot in the river today where she was drowned. She drowned herself. I never knew the reason behind it, but it was said she started to lose her mind and preferred death to that.

“The master’s name was usually adopted by a slave after he was set free. This was done more because it was the logical thing to do and the easiest way to be identified than it was through affection for the master. Also, the government seemed to be in a almighty hurry to have us get names. We had to register as someone, so we could be citizens. Well, I got to thinking about all us slaves that was going to take the name Fitzpatrick. I made up my mind I’d find me a different one. One of my grandfathers in Africa was called Jeaceo, and so I decided to be Jackson.”

An unabridged version of the interview is online here. Of note is that, in the online reference, the WPA interviewer says that Jackson’s “mind is uncommonly clear and he speaks with no Negro colloquialisms and almost no dialect.” In the interview Jackson says “I never went to school. I learned to talk pretty good by associating with my masters in their big house.” So it appears that Jackson’s is a somewhat unique voice in comparison with other freedmen and women (such as dedicated field workers).

The interview packs a lot of complexity, poignancy, humanity, and self-awareness in a few paragraphs. What was most touching for me was that, when given the chance to choose his last name, Jackson did not choose the name of master, which was common among the freedmen. Instead, he reached back to the name of an African grandfather. Jackson was making a statement in doing so. I wish the interviewer could have explored the meaning of that choice a bit more.

2 thoughts on “Martin Jackson: Recollections of a Confederate Servant”