The grace, dignity, and poignancy of the photos in this blog entry belie a bitter memory for many Indigenous people: Indian boarding schools, such as the one at Hampton Normal and Agricultural Institute, which is now called Hampton University.

The abolitionist Frederick Douglass, in response to a question he often heard from whites – “What shall we do with the Negro?” – said “Do nothing with us!” Leave us alone, he said… haven’t you done enough to us already?

Those comments were probably echoed by the American Indian of the day. The 1800s were a century long battle between Indigenous and European-descent peoples for American land. Whether destined or not, the European peoples would have the land, and control it from sea to sea by the end of the century.

One solution for dealing with Indigenous peoples was to “civilize” them. Reservation schools were created with funding from the US government and often the support of Christian missionaries. Their purpose was to inculcate the Indian with white culture and prepare him for life among European Americans – to “Kill the Indian in him, and save the man.” In addition, numbers of Indigenous young were placed in boarding schools where they were educated and acculturated away from their families.

Hampton Institute seemed a good fit for them. It was founded in 1868 by General Samuel Armstrong, who commanded colored troops during the Civil War. Armstrong had proposed the Institute as a way to “to prepare colored teachers for southern schools; teachers who will cost less than white; who can live the year through in one place, thus saving expense of transportation; who, in fact, can make a living out of their schools, and after being started, support themselves [through augmenting their low salaries with money earned through manual skills learned at school]; who will penetrate the country and, singly, occupy isolated remote places where our [northern white] ladies could never go.”

The United States’ Indian policy eventually funneled Indigenous students to the Institute. As noted here, “Armstrong’s dual mission at Hampton quickly became clear – ‘uplift’ the Negro from his state of degradation; ‘civilize’ the savage and teach him how to work. Members of both races would be taught to dress, speak, work, behave as whites– despite the fact that they were offered no guarantee that they would ever be offered powers and privileges equivalent to those enjoyed by whites.” 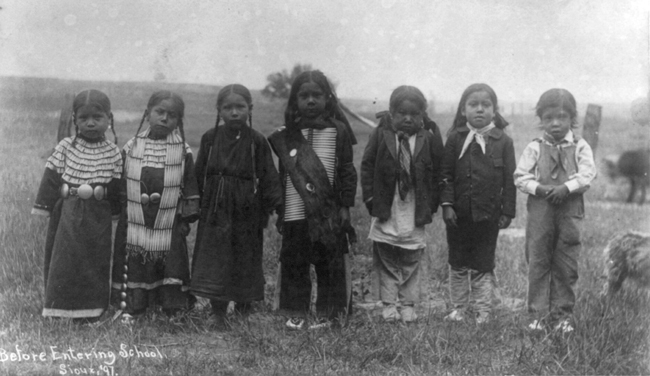 “Hampton Institute, Hampton, Va. – before entering school – seven Indian children of uneducated parents 1897.” The caption indicates these are Sioux children. From the Library of Congress.

Indian students were enrolled at Hampton from 1878 through 1923. The first group to come were prisoners of western Indians wars who were being held in St Augustine, FL. More (non-captive) students came as time passed. Black and Indian students took classes together, although there were segregated classes for Indian students who needed to build their English speaking skills. As best I can tell from online sources, the Indian experience at Hampton was relatively benign compared to, for example, the more famous (or infamous) Carlisle Indian School.

Still, despite any successes in integrating Indigenous peoples into American society, the removal of Indian children from their homes and their culture has been of source of anger and despair for many Indigenous people, and others. This quote is about Indian reservation schools, but is just as apt for the boarding school experience:

For tribal elders who had witnessed the catastrophic developments of the nineteenth century – the bloody warfare, the near extinction of the bison, the scourge of disease and starvation, the shrinking of the tribal base, the indignities of reservation life, the invasion of missionaries and white settlers – there seemed to be no end to the cruelties perpetrated by whites. And after all this, the schools. After all this, the white man had concluded that the only way to save Indians was to destroy them, that the last great Indian war should be waged against children. They were coming for the children.

Two Indian students at Hampton University, late 1890s. From the Library of Congress here and here.

For those who want to do more reading and research:

• The photographs are from the Library of Congress’ Frances Benjamin Johnston Collection. Photos of Indians at Hampton University are here. That collection also has photographs from the Carlisle Indian school; go here. A set of photos of the Indian boarding school experience is here.

• Donal F. Lindsey’s Indians at Hampton Institute, 1877-1923 is a book length review of the subject.

“Lindsey shows the complicated way that one black institution, while still under white control, devised to manage the education and socialization of African and Native American students, not for their needs but in the interests of the broader Anglo-American society.” — American Historical Review

• Sonja Keohane has written an excellent essay on Indian schooling, The Reservation Boarding School System in the United States, 1870 -1928.

• Keohane also has a page of oral history accounts from Hampton Indian Students. The accounts were compiled and edited by Jon L. Brudvig.

• Divide and Conquer: “The Indian Experiment” at Hampton Institute

• Philip P. Arnold’s Confronting the Legacy of Native American BOARDING SCHOOLS has a good discussion of the subject, along with a very ironic photo taken at Hampton.

17 thoughts on “The American Indian at Hampton Institute, Virginia”